It had been a challenging week in many ways for me, trying to juggle some really great personal opportunities (new house, etc.), which was taking up a substantial amount of my time, together with the applied focus that I needed to make in the creation of my essay. So I started the conversation with Rowan feeling a little battered and bruised!  Rowan put me at ease straight away!

To have a discussion with Dr Bailey to try to crystallise my thoughts a little further on how my reflective essay should take shape was what I needed. It had been a couple of weeks since my last check-in, and I was looking for some 'steerage' and reassurance. I provided a two-page summary update in the usual form (an up-to-date copy of which is shown below); 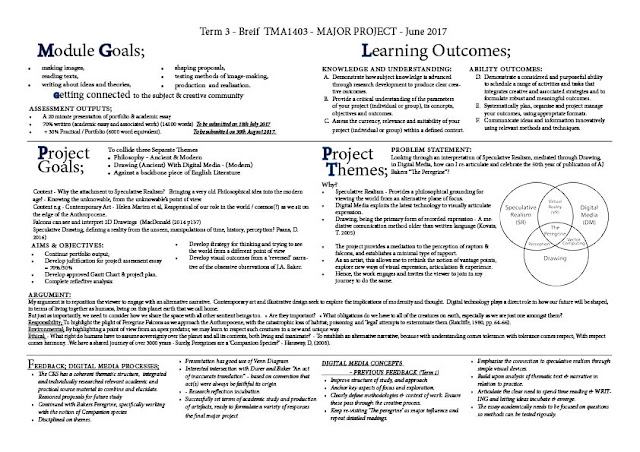 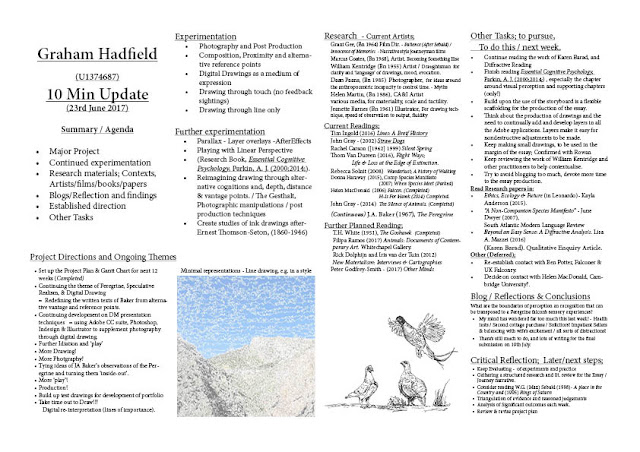 together with a more recently annotated version of my storyboard (also shown below). 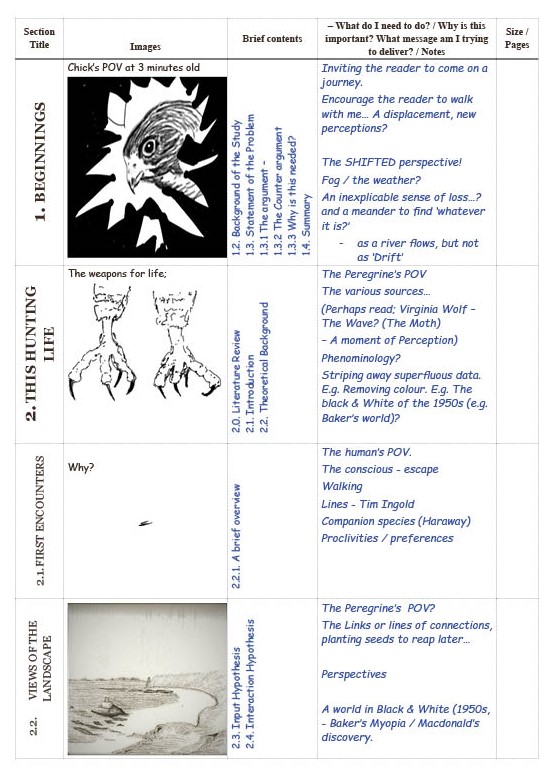 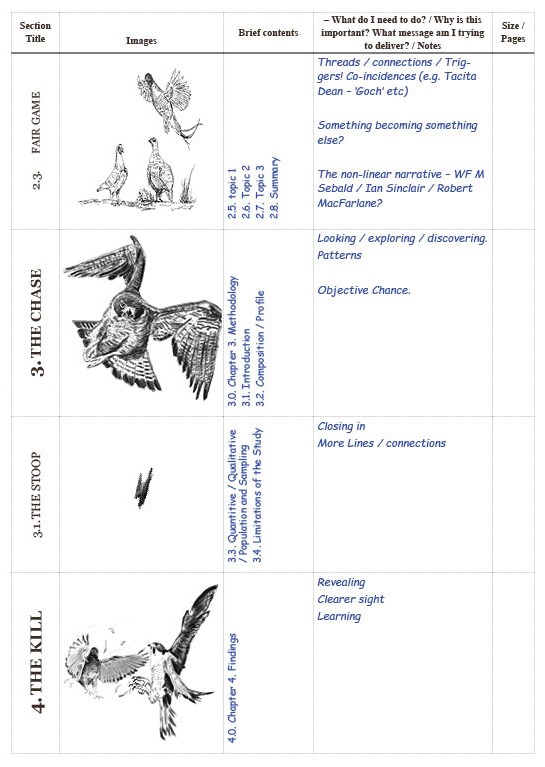 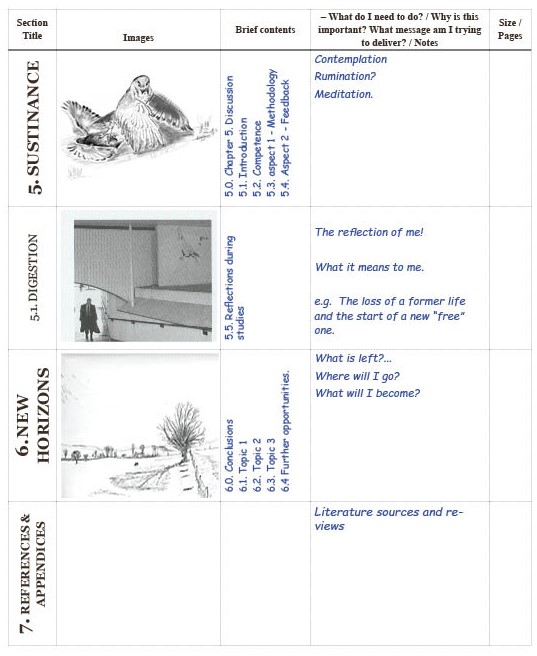 As the process of the structure of my reflective essay is still emerging, I have been a little uncomfortable in that my approach has been perhaps a little constrained by attempting to use the more traditional and perhaps formal academic research paper format. While I have already started my essay based on a paraphrasing of the 'official' titles, into a more speculative re-visioning of The Peregrine, I'm conscious that there is no argument as such within the title of the document. Whilst I have used the storyboard to start to think about what it is that I am going to use for its content, I am using the storyboard as an aide memoir, some structure or scaffolding. However, a major question I had for Dr Bailey, was an observation by Dr MacDonald. This was regarding the work of the early 20th-century writer and artist, Ernest Seton Thompson whom Dr MacDonald had steered me towards during the previous weeks. I've already written some of my initial findings on Thompson's work and in particular, how I love the idea of his stories being published with his own little aide memoir type sketches as marginalia to his books. These simple line and ink drawings are charming and exquisite, and they play perfectly together with the literature. My question to Dr Bailey was more of a kind of concern, as I want to deviate from the usual formal academic report style by adopting a similar, but a different method of including small ink drawings within my own text. My concern, of course, was to understand if this would be an acceptable deviation from the usual academic submission?

I was delighted to get a very positive response from Dr Bailey who confirmed that such expressiveness, especially since this is an arts-based Masters degree, is especially welcomed, and I need not concern myself with trying to conform to any kind of traditional academic style (other than of course, correct and proper referencing using the American Psychology Association (APA) method). Dr Bailey went on to confirm that as my writing is indeed very experimental piece, it is definitely acceptable to experiment both with the text and with the drawings as of the drawing can be part of the experience. Similarly, as the lines of research and enquiry and connections have so much in common with the study conducted by Prof Tim Ingold (and this is about his book Lines: a Brief History, (2007, 2016)). How the visual, and in particular the drawing emerges within writing in the process. Rowan confirmed that it may be, for my own piece of writing, the "beautiful little artist book" form, it does not have to be an academic paper. It can still have academic and critical rigour, and yet still be an art book.

This was incredibly reassuring for me. The next worry that I had regarding my production was the fact that much of my reading and research had been heavily academic. In previous papers, I'm conscious that I perhaps included too many references. I probably overcomplicated individual sections by putting too many references into a document from different sources. I am therefore thinking about starting to be more creative with my own opinions and thoughts as a postgraduate. I'm reticent to make independent views. Rowan was quick to clarify that the final major project is a creative piece. Therefore, if one was to be writing an academic essay is a report then personal opinions may be problematic, however as this is a creative output, rational and evidenced opinions formed through the critical analysis and reflection of the works of others means that, as an original piece of writing, there will no doubt be different "voices", or perhaps a better phrase may be "registers" coming in, to produce this artistic and creative artefact.


In thinking about this question a little further, although my initial thoughts were ideas for example from Donna Haraway et cetera, and from a background point of view, speculative realism needs to be discussed in a limited detail: perhaps some pointers to what it is at a fundamental level and how I have been able to interpret it on my own and adapt it to my own thoughts, including some of the history perhaps from Aristotle and Plato: but then coming back to the anti-anthropomorphic point of view, I can then start to talk about the stories that come into play. The story begins to unfold, I need to incorporate JA Baker's The Peregrine and his obsessive observations. I feel that obsessiveness of observation is what is critically important, from my own work. That is important as a story because of how he gets so close to the Peregrine, and in his mind becomes a Peregrine almost himself. This also leads on to Helen Macdonald, and H is for Hawk, and her own discovery of herself, and as a side link to that, her first book Falcon, before H is for Hawk, and then finally the surprising discovery on the back page of her book Falcon, and the photograph of me, in a former life.

While those were my initial thoughts of the reference points that I need to think about, Rowan correctly pointed out a slightly different view. That is, what stories would she like to read about in my (that is Graham's) speculative journey?  Those original thoughts with the academic theoretical journey, but not my own personal one!

Rowan asked a critical and brilliantly intuitive set of questions, which I paraphrase and ask myself, here;
This can be a very creative process, & Dr Bailey recognised that at the core of this 'speculative re-visioning' is about shifting perspective!
This could be discussed later as part of the story, that I'm telling in a way. However, I agree with Dr Bailey that it is probably more important to set the scene early. It is after all, speculative, therefore has to be about shifting perspective not necessarily in a fictional way, but through intention nevertheless.

In other words, this is a story about shifting perspectives!

Thinking further then, on my own journey, I would invite the reader to accompany me, on my own journey of investigation into the book by JA Baker published in 1967. At first thought, the perspectives are all of the things that I have explored around Donna Haraway too. I do not have to do this in an academic sense, but I could do it through how my encounter with Haraway, and all the other sources (and how I have got to grips with them), has made me rethink aspects of Baker's book or my journey?

Rowan likened it to different voices;  These different voices, therefore, are voices of yourself. It's possible to even play with the structural form.
In shifting perspectives, for example, as a novel, there would normally be alternate chapters such as; the Peregrine's view, and the next chapter the human perspective, and the next chapter may be about the Peregrine's perception...
But all of these can be narrative points of view!

Even though it may be the Peregrine narrating something, and even though it's an "anthropomorphic gesture" (as Rowan put it), on my part, - That is, by me getting inside the raptor and imagining what the Peregrine might be thinking.

All of that creative play can be applied to a recollection of this whole past year of my journey, and as Rowan put it, "the phenomena" in a sense.

There is an opportunity, therefore, to experiment in, and through, the writing itself.

This conversation has been quite critical for me because it has opened the door for a much wider ability for me to create, as I felt somewhat stifled by trying to comply with the academic structure.

For example, I don't have to say that it's a particular document with an academic methodology - The method is the book, the investigation.

While I need tell a story, what I do need to include is;


My own subjective, lived experiences start to come into the story that way.

The standard academic structure would have been a struggle to comply with.
Because I've been trying to do a project which is opening everything up and break boundaries, I would be making poetic reflections, but an academic format might (would) stifle these.

While the new chapter headings in the essay are entirely acceptable (see storyboard above), they should also allow me to tell the story of the process that I have been through.

I then need to try to create a structure of what the piece would be itself. That is a creatively written outcome.

....And all of the time thinking about shifting perspectives.

....Hanging onto my own voice as a creative researcher but also recounting the investigative journey.

As an attempt to take this forward I'm currently trying to index my previous reflections and blogs so that I can paraphrase and reflect upon the voyage.

So while the formal structure has been a block, this conversation is much more open for creative input and now OUTPUT!

The book itself must be a beautiful artefact!

To submit this with my blog in July as an original 70% piece of the major project is perfectly acceptable. Then the 30% part can be the visual outcomes and pieces that I have been thinking about.