Inspiration... The battle within! - Reflections on an interesting Workshop, (with Sara Nesteruk, UoH)

Friday's workshop was quite an epiphany; a magic moment for me!  It seems that the more I try to work out a process for my creativity, the more I am led to writing about it. Which is leading me to think that perhaps my real practice is in the writing of it, itself!...

Sara's workshop opened with a suggestion that when searching for inspiration, a first step that she finds helpful is to just start writing.   Write about anything from within!

The first step in the exercise Sara set, was for us to write for approximately 30 minutes, and then to pause, Step 2; go and look at something completely detached from what we have written, write about that, then Step 3; reflectively write up on the whole experience.

So this is the outcome of these exercises below;

Just looking out from within and writing my thoughts;

My mind is wandering through the valleys and hills of North Yorkshire. Or a typical English landscape with hills and meadows.

There is a Skylark flying high above, making its usual trill of random notes, which gracefully swishes across the canyons and lowland streams.  How is this tiny creature here at this time of year? – Where does it take shelter from these freezing winds and hailstones?

My heart is racing through the strenuous walk. The breath of my existence is tangible almost, through the vapour clouds that flow from my shivering mouth. My arms are heavy with the coat I wear, but my legs are strong and ready for the remainder of the climb.  Looking down, half way up the mouth of this valley, I see a child’s magical re-assembly of their image of winter. The Snowman seems to beckon me with his branching twig arms towards an unknown liminal space of white nothingness.

The stone wall; that black lichen covered permanence of man's presence thrusts itself through the snow. The black smog of two hundred years of toil and fires from the cities has engulfed the rock and grit so tightly in its grasp. Blades of frozen glass shards of translucent green, wisp and rattle against the base of the walls, the delicate grasses have the strength to endure the coldest of winter days and writhe in unison as flurries come and go.

The Skylark’s sweet tune is fading now.  My arms and hands are cooling in the blustering wind. Time to move.

Walking further on the mud trodden path, now frozen in staccato patterns of sheep foot holes of recent passage. My boots skid across the mesh of open treads, loosing grip, though, being unable to ride the leaf-thin film of wet thawing ice between foot and hardened mud.

The air is thin, my coat blows cold, it’s chip, flap, flap, flapping against my chin and red raw cheeks.  I pull my hat lower.  My head is light and empty of thoughts, just bearly able to make out a distant tune of the skylark.

Far below, the wisp of smoke rises from a remote farmhouse. I imagine the roaring fire within. Big armchairs; a dog lying across the hearth maybe.
Warmth.
Warmth is what I need. The cold air is biting me from above and from the end of my fingers, now numb with the grip of the salutation and greeting with Jack Frost.  The snowman looks distantly on at me, with indifferent curiosity.  Why would anyone be out here in this temperature?

We share something in common, that child’s nod to winter, and I.  We are both alone.  Far from anyone to hear us moan or curse this wretched cold.  I’m low and deep in thoughts of nowhere at all.   But then my spirit is lifted again.  The distant call of the Skylark comes back into zone.  Mood lifts and falls, and lifts again like the rolling of the sea.

I must keep going.  Where is my goal? – I have none. It is the journey that is the goal, my likely finishing point will be where I started.

I will come full circle, but the warmth of knowing the journey’s nuances makes it all worthwhile. I will make some fire when it’s dark and start again when I have eaten and slept.

But where? Where can I sleep in this cold?

It took just over half an hour for me to write that short passage, no doubt influenced by both the time of year and my walk into the studio, and moreover, the quick sketch that I made while killing some time earlier at lunch that day. 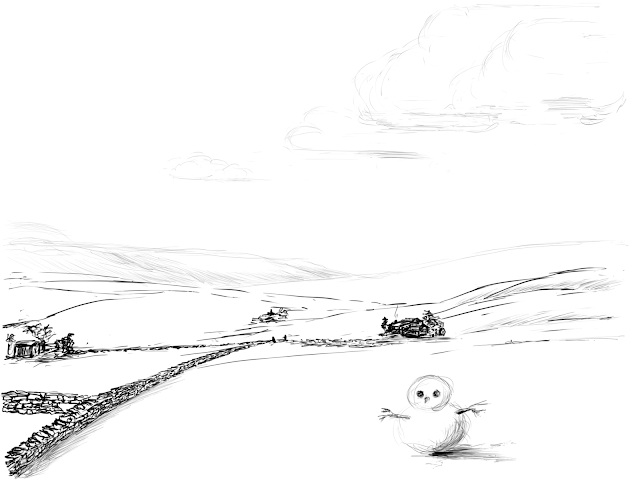 It's satisfying that I can imagine narratives quickly, but the process of drawing from imagination seems so much better if accompanied by writing too.  I'm pleased with this approach and will adopt it more generally.

And then on to Stage Two.
I spent 15 - 20 minutes in the library, and semi-randomly selected a book by the Getty Museum (a Guercino Catalogue), I randomly found a sketch of a landscape with a sea jetty and stonework, that instantly caught my attention;

Guercino – Sea Scape and Castle (Casa Gennari)
Guercino’s use of subtle shading that brings out shadows and contours of light makes the line drawing effuse a sense of calm. The promenaders on the jetty are both captured in a moment of work in the foreground, but idle strolling in the mid vista.
The arches under the jetty are suitably void of detail, but provide a structure and scaffold for the drawing to rise out of the calm waters.

The tower is skewed towards the right, suggesting that the artist was not necessarily directly in front of the drawing (pad or easel), but to one side; therefore unable to immediately see the perspective of the architecture.

The two boats in the centre of the picture are neither tethered, nor in motion, but an oarsman is clearly seen pulling a punt to stabilise the ship as his mate draws a rope towards the bow of the boat.

Under the central archway, the light of the outer sea creates a shadow filled silhouette of a recently arrived skiff. Strangely, though, there is no reflection from the water below the boat, yet there is a reflection of the archway above.  It is evident from this alone that the sketch was made 'in the moment'.

Immediate reflections on the above writing:

The response addresses how my interpretation of Guercino can be articulated from a critical view through Artistic discourse.  While it describes the picture’s contents, perhaps it doesn’t address what caused the original artist to stop his other activities and pause to draw this scene.  It highlights the transient nature of drawing as sketches, through the observation of missing details that speculatively may have been present, but are simply lost in time. The existence of reflections is an interesting theme that in itself suggests a temporal existence which may, or may not be present, or have existed.

In further consideration of the above, there's a strong influence of drawing being a transient, fleeting activity, in some ways, similar to that of traditional photography.  The artist's intentions to capture a moment in time is mediated by what they immediately see and choose to record; so a narrative can be both created through latent imagination or through a particular engagement. How a "scene" is described to 'another' is what is important here to me.   If a sentient being 'could' report through a visual description or narrative, how would they present such a response?

Sara's workshop was really helpful, it's a very succinct way to expand upon imagination and to create that elusive seed of inspiration.

Nevertheless, I have lots more to do, before I can say that I have achieved a level of mastery in this process!
Posted by Graham Hadfield at 17:06