Reflections on a guest lecture by the interactive design studio "Invisible Flock".

The following notes are taken from a really useful lecture held on Wednesday, 16 May, provided by Rich Warburton, of Invisible Flock, an interactive design studio, based in Leeds.

The intention of the studio is to embed digital design technology directly into everything that they do. Digital technology is part of the ethos of this group, and their continual question is "how can you incorporate IOT (the Internet of Things) into creative art?

The group is a cross-disciplinary practice of artists and digital media experts including a highly capable computer programmer.

An example of a current project is one called "beta" which is intended to bring business and art and technology together in artistic practice, which is based at the Leeds East Street Art Studios. Its objectives are indeed to embed technology into art practice, but at a softer level to scale up intimacy, that is, to "broadcast emotion".

The group recognised the need for human centred design, after all, it is acknowledged that all people are "actors"!

This means that digital media interactions and ultimately culture are intimately shaped by constant iteration and feedback through audience participation and reception.

One particular area that is being explored in focus at the moment is in doing work for mobile phones. These devices provide a platform "space" of new images visuality and audio.

Art can have meaning through the interruption of daily reality. It can cause a shift in perception that is unexpected. For example, in Berlin, there is an art piece constructed throughout the whole city and is found as small embedded brass tokens fixed into the pavements, the German phrase roughly translates to "stumble stones". These small but noticeable subtle symbols in a way celebrate and remind walkers about the Holocaust. It is both gentle and subtle but is incredibly poignant once a person has engaged in its exploration.

This example can be likened in many ways with the Internet, which is equally accessible but is also an interruptive exchange and experience.

There is this assumed relationship with mobile phones, in that if there is an application that has been downloaded, one of these small "apps" often used as a kind of marketing Dolly, it is apparently expected to work! However, the complexities of different types of operating systems, platforms, software dependencies, hardware versions and so on make it tough for these app developers to have total confidence in the released and published apps effectiveness.

To try and tackle this problem, Invisible Flock of developed a relationship with an Indian software house called "Quicksand", who are specifically developing ideas for mobile phones that are cross-platform and hardware independent.

An example of one of the projects that are already online which cross this boundary into cultural and creative art is called "Duet". The concept of this idea is a digital interaction between strangers, where the mobile phone short message service (SMS) network is used to conduct a year-long conversation between strangers, based on asking one specific question (anonymously of course) and getting a corresponding one answer, between participants per day for a whole year. The results are of course anonymous but are then aggregated and analysed. The need for an immediate emotional feedback loop has been recognised by the writers to keep interest and motivation of the participants to a high level.

What results is a very complex dialogue, through the prism of a simple question. In a sense, it works through illuminating relationships through disparate timescales and intervals. It's a kind of nostalgia and taps into emotion through articulations that would never exist or be there "officially". Therefore this program "Duet", and its concept of just having one question a day and one answer in total anonymity, can be very revealing about human nature. It forces the participants to engage in a dialogue that is entirely anonymous and therefore without the emotional baggage that may be pre-known. The outputs, therefore, seem to be "clean". That is they are tending to be more honest and less contrived as a reflection of intimate human thoughts in our contemporary culture.

An absorbing and stimulating lecture, I felt the presenter had engaged with a deeply sensitive and smart vehicle for exploration of not just the West or isolated cultural facets, that a thoroughly engaging method to start to view the whole global human condition.
Posted by Graham Hadfield at 11:49 No comments:

Working through the ideas of stripping out the superfluous detail associated perhaps with human perception and phenomena, the drive towards recreating not just landscape topology, but generally the black-and-white line drawings of what could conceivably be some halfway mediation between human and Peregrine perception. I've been thinking about some of the images that I was able to capture during the Easter holidays at Devil's hole in Jersey, on the more remote North/Northeast coastline. I came across these sheer cliffs almost by accident whilst touring the island with my wife. Imagine my joy when I looked up and saw a pair of peregrines, falcon and tercel, circling above the cliffs. Whilst I was able to take a few photographs using the camera built into my mobile phone, the birds were a little too far away by the time I was able to extract the phone from my pocket. Therefore, I've been left with some nice shots of the coastline and the habitat in which the peregrines live. I later even saw what appeared to be a falcon with Jessies (Falconer's short leather straps), attached to its legs, that appeared to be independent and becoming wild again. At least there was no sign of a falconer and the bird's freedom seemed evident.

After coming home and processing one of the photographs digitally have been playing with the idea of vectorised graphics (through the use of Adobe Illustrator CC), and how I can strip out the superfluous details of colour and yet retain a semblance of edge recognition from the drawings.


At the moment, I still feel that a truly digital shortcut towards recreating the visual images is less likely to work. There is much less sense of expression in the work compared to hand-crafted drawing, even if the drawing is made on a digital tablet. Nevertheless, I need to keep experimenting and reflecting on what seems to be working for me, and that which doesn't and should be abandoned perhaps. I just need to keep going!
Posted by Graham Hadfield at 22:23 No comments:

Reflections on a short one-to-one tutorial (12th May)

I spent a little bit of time with my module leader on Friday which was very useful to discuss my ongoing work towards the major project. To articulate my aim and objectives succinctly and clearly, I usually create a single page summary. Clearly, this is a work in progress and forms the backbone of current progress and future objectives.

The current format of my aims and objectives are clear as they have been emerging for some time and are now crystallising into firm goals. 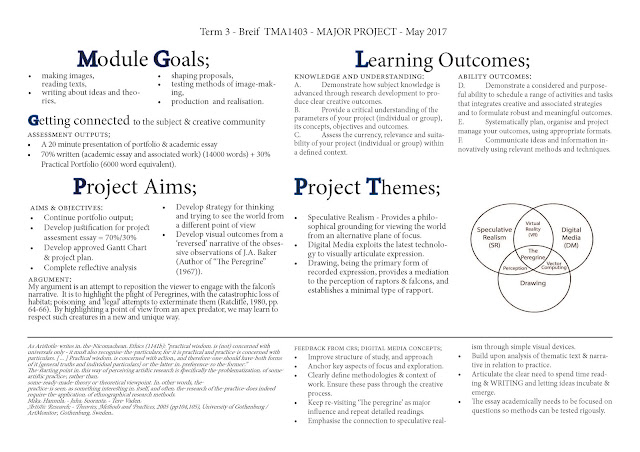 However, my academic argument for my project is still a bit hesitant in its language. My tutor pointed out that the work feels orientated towards an environmental discourse, but I am not sure if that is my sole intent. I need to think a little bit more carefully about how I articulate the argument.

What I found encouraging was the comment that it is useful to include in my thoughts and reflections, and ultimately my final essay my own interpretation and cross-referencing with the work of Donna Haraway and her notion of companion species, through reading and researching the book "when species meet" 2007. An interesting concept is that it could be argued as an act of inaccurate translation?

This fits well with my own thoughts about drawing and in particular the act of drawing. The expression of the theoretical framework.

Therefore the argument is critical. The notion of vantage points needs to be incorporated more fluently in reference to speculative realism. 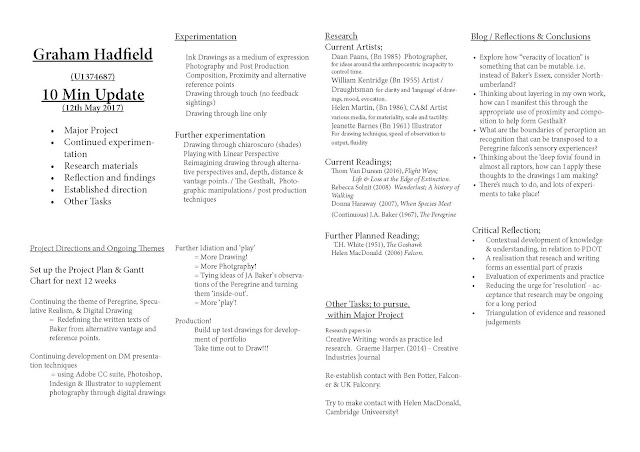 Ultimately what will help me to not only drive forward my thoughts on interpretation and translation but also my expression of these, is the act of drawing itself. I need to immerse myself in drawing for more than I have been doing, and I recognise I have the opportunity to do so now that the previous terms have been completed, and my focus can be committed to the major project.


Posted by Graham Hadfield at 11:47 No comments: