Observation in Research, lecture by Alysia Grassi, University of Huddersfield, Wednesday 24th of May.

This will particularly useful lecture aimed at discussing alternative ideas in observation and using 'observation in research' practice.

The objective of all academic research in the creative arts is either qualitative or quantitative. Questions that are asked in this domain are:
Observation is concerned with what people do and how they interact. Consider it as systematic viewing, which should be done as an iterative process, and never in isolation.

When considering observation for either qualitative or quantitative research, one must be able to describe 'what it is' that is being carried out. The documentation and recording should be targeted together with the analysis, in relation to the research question, - which equally has to be adaptable.

The ethnographic technique has been used in anthropology studies for many years. It takes place with the informants responding and being observed, within their own natural habitats. In sociology, it is not only about watching human behaviour, but also through 'talking' to the informants to discover their own interpretations, through the use of direct one-to-one interviews, social media and other activities. 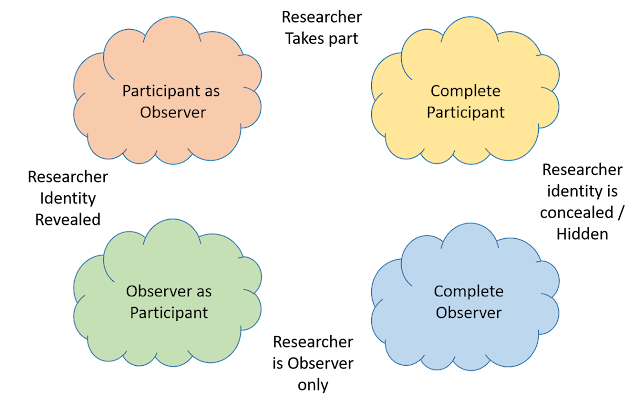 Other things to consider are:
Time:
Reasons for observational research:
The method of observation can, however, be subjective. The behaviour of the observer may affect what is being observed.

Furthermore, consider potential errors and biases. Generally speaking, errors occur through:
Biases occur, again quite often, through a lack of time.
All in all, make sure one takes detailed notes about the environment.
And finally, when writing up your responses, there are some interesting lessons to be learned from 20th-century creative writers such as John Debbion and Hunter Thompson amongst others, and sources of reference can include books such as "the Rum Diaries", "Fear and Loathing in Las Vegas", "The Hells Angels" et cetera.

Basically, all of these observational texts are written in the first person.

I found the lecture particularly engaging, but a little bit disappointed that the timing of this talk was rather late on during the schedule of the overall course, as much of its content may have been useful during our own research in previous modules of the MA study. However, I do appreciate that the lecturer may simply have not been available to provide this input at an earlier opportunity, and so I am grateful that we have been able to gain;