Pushing myself forward now, the Sun's coming up and Drawing at 6:30am!

The view from our cottage window down the Hetton valley is truly beautiful this morning, Dovecote field in front of us is thronging with young pheasant poults, field hares and a few adult pheasants too. 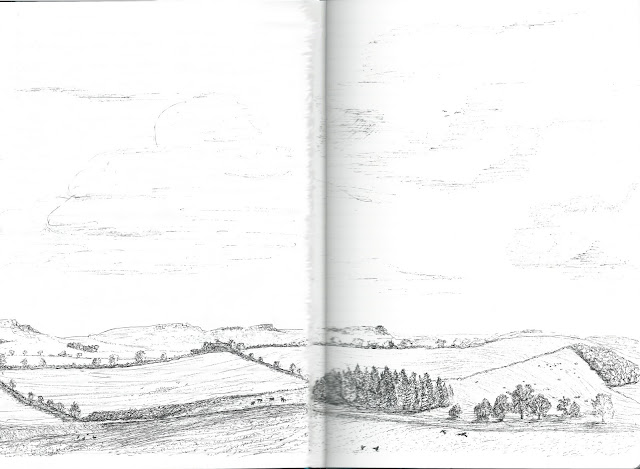 A cock pheasant in all his resplendent colours is guarding his harem. His regal pose, with upright stance, his head and neck stretched way above the other birds commands instant respect. There is a sense of piety in the way he looks, especially because of his striking reverential white dog collar surrounding his neck. Like the village parson, overseeing his flock, perhaps even giving his morning sermon? This is far too anthropocentric I know, but one does wonder! 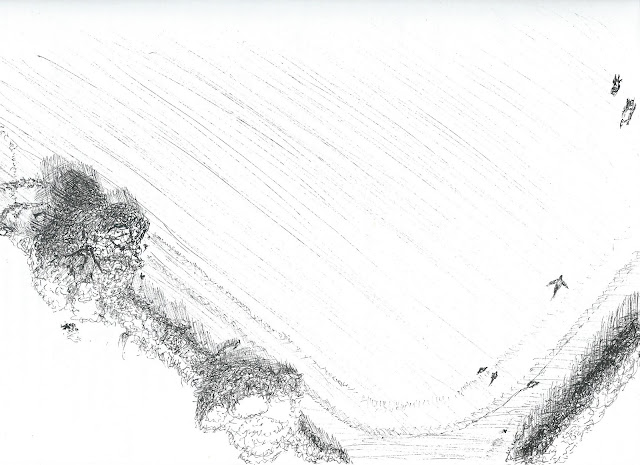 I find it incredibly hard not to believe that certain species of animals are able to intercommunicate with one another, especially herbivores. There is a sense of sharing in mother nature's glory on the morning like today which is tangible and palpable.

The remnants of wispy mist rise slowly from the distant hills and valley basins. A quick sketch before breakfast sets me into a good mood for the rest of the day and I've started to write some further ideas down to speculatively think about representational images from the Peregrine's perspective and "the Peregrine's story". 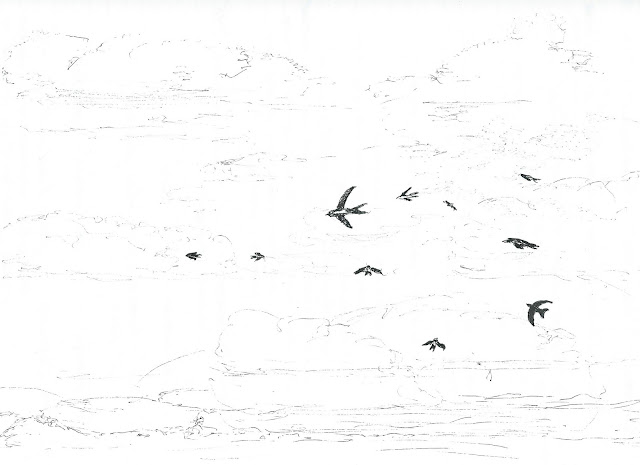 Thinking about the clouds and the free movement of the summer swallows, I positioned myself speculatively above them or at least floating in parallel with them. I imagined how it might look from 3000 feet, as according to Baker peregrines often glide and rise on the thermal air currents to that sort of height. The classic towering cumulus clouds nearby would appear lower on the horizontal plane, whereas distant clouds would appear higher on the horizontal plane as one would be above them. This would be the reverse view that we as humans have from ground level.

A suggestion by Rowan and Richard a few weeks ago to renew some of my thoughts and remove images of the Peregrine itself has been playing on my mind. Critically thinking through what a Peregrine may see as an important object in its day-to-day activities, I feel that the inclusion of other peregrines, and particularly when in the United Kingdom, the breeding grounds of peregrines, then it necessarily follows that encounters with either the Falcon's mate, the Tercel (the male); or alternatively for the tercel to see the Falcon (the female) will occur frequently. It is perfectly appropriate therefore to include images of other peregrines and also their chicks.

This is led me to think about some speculative drawings of chicks feeding? I'm also thinking further about views from the Peregrine's scrapes too. My plan is to climb some nearby crags which are perfect Peregrine nesting points to try and find primary source material.

Posted by Graham Hadfield at 11:32