Reflections upon the lecture "Archival Interventions"

As postgraduate students, by engaging with archives and using them as "interventions" in our creative practice provides us with an excellent opportunity for primary research!

Archives and collections are so varied and widely accessible that they are an instant source for us as creative practitioners to choose from. 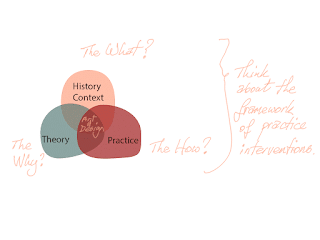 Dr Rowan Bailey articulated the idea of triangulation between the top-level "history/context" (in other words the "what") mixing through art and design "practice" (the how) and also with the "theory" (the "why" part). It is useful to think about this as a framework of practice and intersections and can be drawn as a Venn diagram of intersecting circles thus.

A fundamental concept in thinking about the archive is the introduction of new ways of thinking within itself. In academic and historical discussion these are often referred to as a "turn".
In thinking about "The Archival Turn," this is about the spark of an idea that becomes a new currency of cultural thinking through the use of archives.

The Archival Turn has come about through the works of turn in continental philosophy  -for example, Jaques Derrida turn in, contemporary art and criticism turn in the creative industries (within the heritage sector in particular).

"Turns" can be thought of as fashions. Each shift in conversation within popular and academic culture takes place, then fashions of thinking follow.

To look at the work of Jacques Derrida, he often uses the mechanism of researching the etymology of a word, to find its derivative. If we apply the same process to the word "turn" we will find that it is come from Greek and Latin origins, eventually through old French, then as late old English, to mean "to rotate or to revolve". But it also means "to refresh" and so this can be applied to mean to refresh as a research method.

See the essay by Jacques Derrida entitled "archive fever" (1996) which is highly influential investigation of the discourse of Sigmund Freud. Freud's discussions at the time were highly complex, yet contained contradictory readings. The conclusions that Jacques Derrida comes to within this essay is that "it is not a concept of the past but a question of the future".

Further works to look at might be the essay by Hal Foster (2004) entitled "An Archival Impulse" which also provides new ideas and inspirational thinking or perhaps that should be aspirational thinking of the idea of utopia (to which the etymology of the word actually means "nowhere" or "no place"). This puts a very different spin perhaps on the public conception of utopia as a paradise or ideal place.
Consider also the work "Museum maker" funded by the arts Council England in 2011; and "Transforming Tate Britain: Archives and Access" which can be found at HTTP://www.Tate.org.UK/archive 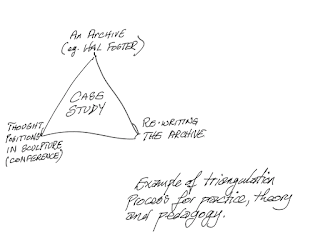 An archival impulse (Hal Foster)
case study
thought positions in sculpture; rewriting the archive.
An interesting alternative angle might be the work of Thomas Hirschhorn and his description of "The Archive As a Capitalist Garbage Bucket"

A public space archive creates an intervention that causes the exposure of different communities to new artefacts or "stuff".
It should also be considered in tandem with the notion of "affect", which is the human felt a result of an event, and interaction, a phenomenon or experience
How does "public space" provide a platform for making statements of archival monument? Hirschhorn makes a mischievous engagement to some degree by citing his works in locations that may "re-purpose" the site and object. 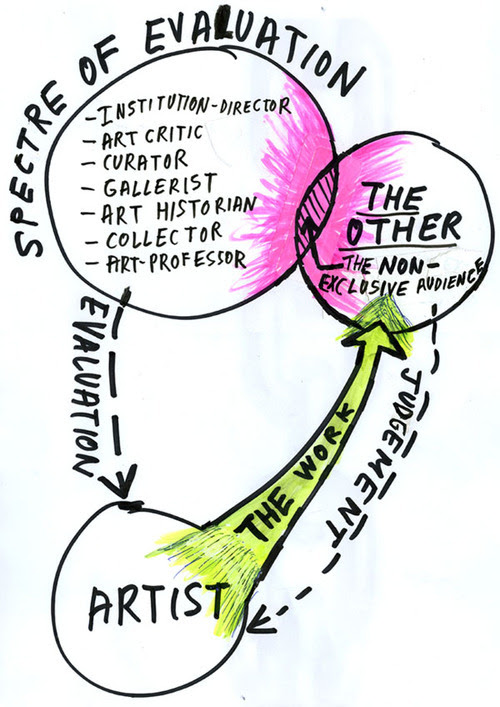 See the Work "Spectrum of Evaluation" (2008 to 2010) by Thomas Hirschhorn
http://www.artandresearch.org.uk/v3n1/fullap01.html

Other practitioners include Tacita Dean in for example "Jean Jenie" and her stories and encounters.
And Sam Durant "Free Beer" which is a disjunct or conflict of post-modernist architecture which meets in the 1980s and 1990s.

Avenues of thinking, approaches and the ways of the journey of production of imagined states that reveal hidden states of the human psyche.

In may be useful to go back to see the work of John Dewey (1929) and his book "art as experience" which is an interesting investigation around the concepts of thinking about thinking, and creating the idea of making an environment where the "the thinking is made through the doing", and how does the concept evolve through to an actual tangible event?

How do we inhabit the space for creation within research, influences and shapes the production of situated forms of knowledge through obtaining new experiences?

For example in the work of Dr Rowan Bailey and the exhibition entitled "Thought Positions in Sculpture", she created a full exhibition as a platform for her research.

As well as creating objects and artefacts, it is also essential to continue to write "in, with, and through" the work that you are producing.

By creating narratives and writing through the work it enables one to experiment and develop a critical writing practice;
1). What materials does the work engage with and what are their forms?
2). How do they contextualise the work within the current practice regarding the wider field, both concerning other practitioners and what is fashionable or a topic of academic discussion of the moment?
3). What thought positions does the work that you are producing have?

An example cited here was the recent work by Nicola Redmore and her textile sculptures, influenced by Kenneth Armitage. [It was interesting also that these reminded me of the 20th-century artist Giacometti and his sculptural forms of humans and animals, for instance, those positioned in Times Square in New York].

An alternative thought position might be that which was articulated in Dr Bailey's exhibition, entitled "Anonymous Sculptures".

In all these works it is clear that the authors or artists have created a particular and peculiar "language" for articulating the work by both explaining the research and how you engage with it to then fully describe what you then produce.


Tasks for the forthcoming week: 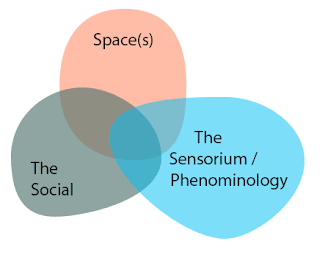 Posted by Graham Hadfield at 13:59