I had a really useful tutorial and one-to-one discussions with my tutor, Richard, on Friday, after which I quickly made as many notes as I possibly could because I found the session so valuable!
We opened the discussion by my explaining that I was now "trying to keep it simple," in the sense that (as one of my feedback points that Richard made at the end of the Christmas term), I was perhaps over-complicating things previously.
By referring back to the previous module feedback (which was highly useful), I have been able to create a "single page brief".  This will help me to try and focus my attention, over this next term. I felt that Richard was very supportive of this approach too. I also think that my tutor took on board the fact that I seem to be adapting my practice at the moment towards writing. While this is acceptable regarding the module brief, (where there need to be approximately 4000 words or the equivalent created), I recognised that it is equally critical to address the issue of artistic practice itself, as almost a separate mindset from the act of writing. It seems clear that the physical and visual method is what is of particular importance here.
I recall that I also explained the very successful workshops that Stella Brackley and Sara Nesteruk had carried out in which, in reflection, I found both of their practices to be very stimulating, and their enthusiasm and encouragement has certainly helped me move forward. This is not forgetting another workshop (by Dr Anna Powell) around post-production which I also found of equal importance, but I can separate out as an almost theoretical workshop, whereas the other two engagements were much more practice focused.
The act of writing and then going forward to "making and producing" something in itself seems to be an excellent exercise that I have begun to adopt. While it is early days, I am confident that this approach will give a richer and more fuller account of my creative visual practice.
I also recall that we discussed this approach of the theoretical writing taking place first.  I think I explained to my tutor the reviews that had begun to delineate around the core of my chosen subject matter, which continues to be "how I can use drawing" (as the primary form of expression) through digital media and collide it with the philosophical construct of speculative realism? 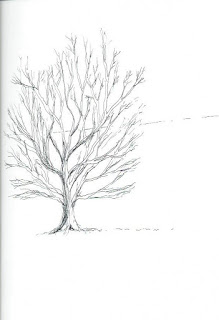 I also further explained that I am continuing to use the book by JA Baker entitled "the Peregrine" (1968), as a backbone narrative to help me position my work. By creating a visual reinterpretation of the above, and staying with the initially chosen book "the Peregrine", I used an example of a piece of work that recently came to my attention. A visually stimulating idea from a fantasy / other world views, and explained that by creating something that "isn't the normal thing" for humans to see is what I'm interested in.  I'm committed to re-articulating this through drawing and sketching by taking passages from Baker's book.


I'm also thinking about how biology can provide an understanding; That is, the idea of how falcons can see. The eye itself is like a camera which I particularly like.  The idea of the image being transferred to the back of the retina: the fact that peregrines eyes take up most of the cavity within the skull: their ability of their binocular vision. All these start to act together to provide new concepts and thoughts about how the Peregrine's perception can be very different from the human's.
I was really pleased to feel that my tutor seemed to 'link-up' with me and appeared to join into these ideas. I also picked up a genuine interest from Richard which I found truly encouraging. 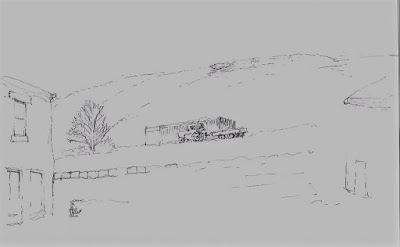 I went on to discuss some details about the structure of the Peregrine's eye and how the retina is composed of two different parts of the fovea. - Recalling too, my explanation how the Falcon is entirely reliant upon its eyesight and without it, it is unable to find any kind of "reference". This is the reason why falconers use a 'hood' to put their bird of prey into total darkness; because quite simply, the birds will not attempt to fly without the faculty of sight.
I was able to articulate how Stella was able to describe her research and the concept of "Pixel".  Her paper was really precious for me as I've been able to awaken my knowledge of the retina's construction; namely the rods and cone receptors on the retina itself.
Taking that idea, one step further, (the rods and cones within the retina) and comparing it with the charged coupled device (CCD) that is found in the photographic sensor, completes the circle really well. Therefore, in a digital sense, the eye and its retina together with the rods and cones that make up the organ are very similar in philosophical terms, to the digital camera! 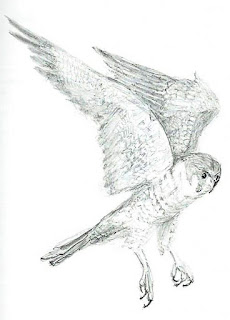 I seem to remember that at this point I also brought in the subject of Egyptian mythology and some of the work that I have been recently studying around the myths of Osiris and Isis and their son Horus, who later became the god of the sky. Horus is depicted as a God in human form, but usually, with a Peregrine's head. I have already blogged elsewhere about this research, so I'm need not delineate it any further here.

I think that in reflection, I was touching on my concepts of the all-seeing eye, and then comparing it to the notions and research around speculative realism?
This is a general concept of looking at the world from an entirely different angle. I seem to recall that I said something like "this idea of looking at the world from a completely different viewpoint is at the heart of speculative realism". Or something similar to that, which I was delighted to see Richard jumped on and made notes to the same effect!
I can't quite remember the precise words I used but it was something along those lines, I also seem to remember that I put an alternative phrase together which included "looking at the world from a different point of view (reference point or perception) is at the heart of speculative realism." But the original phrase was more succinct!
Then, with a further recall, I became a little bit tongue-tied in my explanation of my "artistic problem statement". As by trying to explain the ideas of speculative realism through a verbal/linguistic medium "in itself", might lose some of the magic of translation. It makes it tough to explain the theory; by using words is limiting.
In terms of the work itself; the practice has been chosen as the drawing because drawing is a whole and overarching language in a way. I also seem to recall my tutor agreeing with the concept that drawing is a perfectly acceptable medium.   I think he said " it is the method of the mind and of the eye," which is a really brilliant reference for him to make. 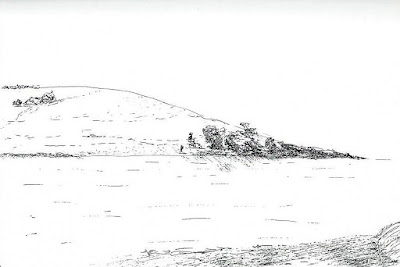 My idea of drawing the world according to this specific Peregrine, the one that JA Baker wrote about some 50 odd years ago, is what lies at the heart of the reason why I want to use his book as a backbone. What was important to that Peregrine, would have likely have been something completely different to what was important to Baker at the time.
Therefore any image of Baker is likely to be quite insignificant as far as the Peregrine was concerned at the time too!

It is interesting therefore that there are now two viewpoints; one human and one Peregrine. I think that Richard was also keenly interested in some of these thought processes that I was having. I was very encouraged by the feedback that Richard was giving me and it seemed that we had 'connected' with a joint understanding. My previous attempts to articulate my ideas have not been quite as successful as this one-to-one meeting, and I was delighted that we seemed to be of one mind.
Overall, to close, my tutor was extremely helpful in making some additional recommendations for further reading; In particular the work by Liz Wells and the book entitled "Land Matters".  The ideas of landscape photography and cultural identity are what Liz Wells articulates in a particularly elegant fashion. I'm glad that I have the opportunity to read this book through an online resource within the University. The chapter entitled Time, Space, Place & Aesthetic;  and another detailing 'The photography Journey and Memory' are also crucial.
Another book which was recommended (which I have a copy of already is by Rebecca Solnit). A copy of "The Field Guide to Getting Lost" which I need to dig out and read again, as I recall this was one of the books I found very useful during my first year of undergraduate study.
However, the book that my tutor was keen for me to review was a series of writings by Rebecca Solnit (that has been edited by Marcus O'Donnel). Entitled "Walking, Writing and Dreaming. Polyphonic voices".
see http://ro.uow.edu.au/lhapapers/1729/

(The book "Wanderlust" is also particularly useful resource as there are further dissertations and essays by a variety of philosophers practitioners and artists including Roland Barthes).