Reflections on the photo project workshop with Sebaastian Hankeroot (of the Hague - The Photobook), 20th February 2017.

The purpose of this photography workshop was to help students bring out the 3-dimensionality of photographs, by bringing out light, establishing the correct focus, and removing distractions. By revising the contrast of photographs and combining the activities above, it can create a new expression in the finished works.

It is perfectly acceptable to change an existing "poor" photograph by changing it and refining it. Do not be afraid to do so, simply because you will always have a backup of the original in any event. Creating a sense of three-dimensional's is essential to good photography.

Ask yourself why you originally made the photographic shot? Keep coming back to that question and critically analyse the work that you do.

Before embarking on photographic adjustments it is essential to calibrate the screen on which you are viewing and adjusting the shots. There are a variety of applications on the open market such as "Spider, Colour monkey, or T-one"

It is also important to consider colour spaces that do not exist on the actual screen, but yet we know that the camera can record. CMYK is a very much smaller file size and range of colour space than what the proprietary Adobe RGB pallet is capable of, or is even more, what our own human eye can see.
S-RGB is an even smaller colour space than either CMYK or Adobe RGB; so the lesson learned from this in itself is to simply forget about sRGB as the colour space is so narrow that it is not worth using.

An important tip when calibrating the screens is to use natural light. Do not allow direct sunlight to hit or reflect onto the screen been calibrated. As a rule of thumb, Gamma can be set to 2.2 and White 26.5. By doing this, this, stops extra warm tones appearing on photographs. With regards to colour adjustment within the camera, try a setting of 200 red 150 green, and 100 blue. Within the camera, the output must be consistent!

By adding other colour filters, such as for example in a photo with a strong magenta cast, this can be corrected with a green filter and so on, choosing the complimentary colours of the actual cast.

The story told by your image changes the way that you edit and feel about it. Create enough density in your image before you do anything else.

Like a painter, build up layers of information when composing a photograph in order to to create an illusion. The photograph can then be manipulated by under exposing and then adding exposure (a recent book by Christopher Edwards shows this technique very well). It turns a clearer three-dimensionality to establish curvature and depth. The light within photographs creates atmosphere.

Organise the process and the work! Take these steps seriously so that you are well-positioned for postproduction. For example, the choice of a book cover, its hardness or its softness, its size et cetera; even the smell, makes a massive difference to your output and the finished artefacts.

A practical explanation of Sebaastian's work was then shown;
the first step using Adobe Lightroom, is to create a picture by reducing the exposure of the original image. Generally this should be no more than about 1.25 to 1.3.

We then conducted a practical analysis and adjustment of some of our own work.
We started with a piece that Sam had created which was an image of Hull docks, with two people sat on a bench overlooking the run-down docklands. An interesting feature of the image was Sam's capture of a kind of triad which included the union Jack flag on the left-hand side and then the two individuals people. Within the whole frame, the two people looking at the shipyard (which is now redundant), holds some irony in the union Jack flag also being displayed. The inclusion of the two people makes the viewer ask questions. Is it boredom? Probably not, - is it Britishness? Possibly.

Liam observed that there was a lovely low light to the image, and there is a lot going on within it.


We then analysed a photo that I had created, perhaps some eight months earlier during the summertime. My intention of this photograph was to create three-dimensional layers by the use of a foreground wall and layers within the landscape and hills beyond. The foxglove provides a link from the foreground wall to the scene and then to the sky. We debated whether this was an important feature of the photo. 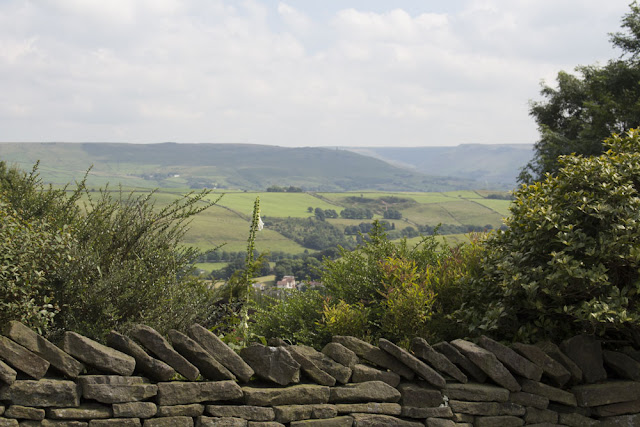 Some practical observations of adjustment would be to change the light within the sky area by bringing this forward to emphasise the detail. On the right-hand side of the image, the wall needs to be lightened in order to make a richer engagement. 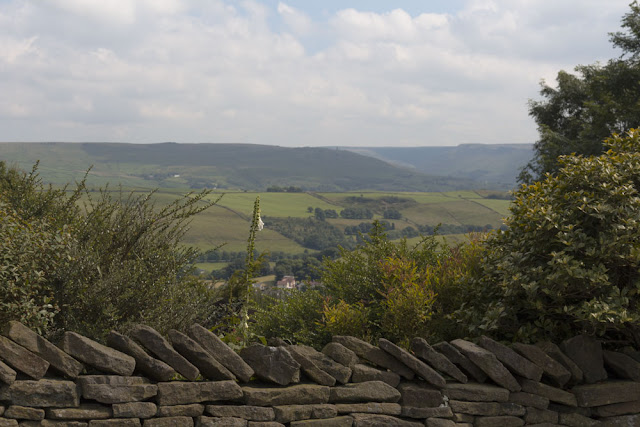 However the foxglove creates a focus which is a suitable subject. Nevertheless in contrast to the dark area on the right hand side, this dark area becomes a distraction.

The wall itself can add expression to the final print and the fronds of each of the branches on the left-hand side can be brought forward through the appropriate adjustment in exposure and contrast to become more detailed. Before and after effect can be clearly seen.

In the analysis of Tim's work (which was a hot sulphur spring that he photographed somewhere in Italy), there is an interesting juxtaposition of focus which is elusive as to being on the water and the face of the person on the left-hand side. This creates a mystery and it takes a while to figure right what the photograph and image is of. The colours are beautiful and so can be brought out to full effect. There is also a sense of chaos in play; the contrast is interesting too. As Tim said, the smell, that foulness of the sulphur and the misty-ness adds to the theatre. There is a sense of the magical, the person emerging on the right on the left-hand side seems to be coming through the gloom.

There is a good sense of three-dimensional reality in the image. It is balanced, but that may be improved by throwing it off balance? The picture itself is a question. There are no distractions, but it could be enhanced.

In analysing Liams photograph (which is actually an image taken by Natasha), of a person sitting in a pub in Hull; this is very interesting as it is clear from the image, that this is a regular customer who has a particular seat that he always occupies. The subjects gaze is accepting and arguably intimate?
The background is interesting too, for example there is a picture of Linda Lusardi who is appearing in a pantomime poster on the back wall. This helps to place the social context of the photograph and where it is. Perhaps some further detail could help?

Overall the composition is balanced. The viewers eye is drawn to the subject eye in the image through good focus. There is a distraction in the glare on the top right-hand, but overall it is non-judgemental which is a good example of good photography.

Perhaps some visual enhancements can be made through postproduction on the gentleman's coat by under exposing it a little bit further.

When we compared all the photographs we asked ourselves if there were any similarities? It was found that the depth and cropping were necessary on the first two photographs, however on the third and fourth photographs the use of shadows is key to these enhancements here.

If it seems that there are dominant colours of an image, it then becomes a question of density, colour balance and tonality. It is critical to reduce the exposure of an image if useful postproduction is going to be used. The workshop was very useful and seemed to imply that exposure reduction was the most important lesson learned from the activity.

Posted by Graham Hadfield at 12:24