Further thoughts on my discussions with Dr Juliet MacDonald, Friday 10th of June 2017.


The numbering of my headings should perhaps be removed as they provide too much granularity, especially in the subheadings/header two and header three styles, should be lost, as an essay is much more flowing normally. The main headings are fine, but the others should perhaps just provide an aide memoir for structure. Juliet recommended that a more flowing reflective essay tends to have a lot fewer subheadings and should not be broken up too much as it becomes granular.

This makes sense because if the essay is too granular it becomes linear, and by ideas of meandering means that I'm looking for a kind of non-linear journey. Juliet pointed out that it's important for me to keep a focus on balance and destination especially as my reader may struggle if there are too many tangents.

One of the techniques that I think is probably a wise thing for me to follow with the idea of planting "seeds" early in the discussion so if there is any meandering to be done, the reader is able to understand where I will be going with my discussion. Juliet asked me if I was going to be using any of the drawings that I have created, and while it is my intention, I find that what I often tend to do is to translate a visual shorthand into a sketch through associations and playing around with different routes. 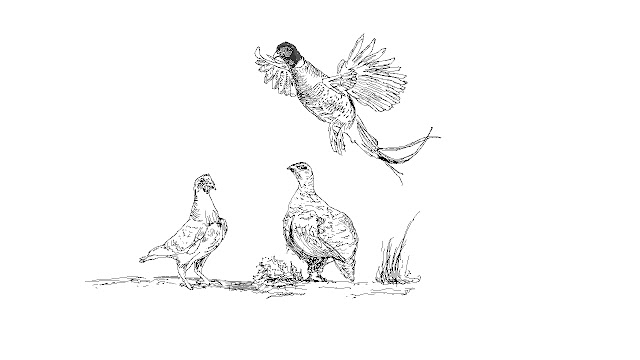 The digital media drawings will form a significant part of my final outcome and should, therefore, be included towards the end of my essay, as it is my intention to submit the paper essay in July, with conclusions to produce the physical artefacts and outputs through the end of July and August. Therefore if the writing forms 70% of my submission, then it makes sense that the bulk of this is submitted earlier, and the artistic, physical artefacts come about from my research outcomes and conclusions. This makes sense to me because it seems highly likely that the work I'm doing may not end at the completion of my masters, as it could well form a body of work that can be built on through further study perhaps at the next level? 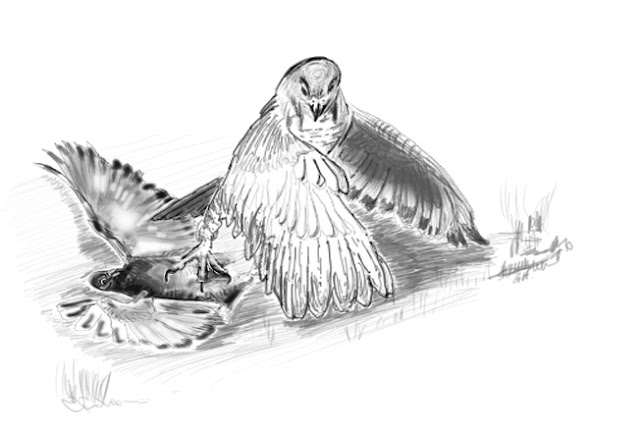 I'm not saying that it is open-ended, but indeed, preparation for a future piece of work that can become ongoing. The journey hasn't finished.

The artefacts that I produce between July and the end of August must be polished and fit for purpose, in their own right but can also open into other things as well. These artefacts should provide good tasters of visual components that could come from my findings

We then discussed the potential outputs, such as very large format drawings, very large format engravings or woodcuts, and also concepts around using 3-D devices such as Oculus Rift or the new HTC immersive virtual reality environment. However, with the time available to me, I am a little uncomfortable that I have the technical competency or indeed the possible time to complete anything much of substance using the 3-D route.

What I am considering seriously instead, however, is based on some ideas that I observed when researching William Kentridge and his Documenta 13 piece entitled "The Refusal of Time" (2012). Taking this idea of projected images on all four sides of the room has an appeal where I would be able to use some of my existing drawings, supplemented with speculative drawings imagined from JA Baker's The Peregrine. These images can then be juxtaposed and layered (which is different from Kentridge's technique), through Adobe's Creative Cloud suite, and the various layers potentially have the same drawing can be slightly shifted. Thus, creating a sensation not too dissimilar from parallax shift, based on the head bobbing motions that a Peregrine Falcon almost always adopts whenever it is not flying, sitting on a perch or other vantage point.

I've already made an approach to the technician's manager, to try and source a space. By projecting the line drawings on all four walls, my observations of Peregrine behaviour can be articulated perhaps through this medium?

Creating some sort of confusion and for the viewer to step out of their normal perceptions is key to my physical artwork being a success. The sensation of three-dimensional witty being recreated through the two-dimensional drawings requires an element of parallax. The element of recognising something that is hard to read, through some sort of movement (of an enormous still image) with other pictures layered behind to create parallax, through projected images of layers, or even multiple layers that can shift is my concept. In itself, this is probably quite a big project but is realistically achievable for me to do rather than some kind of three-dimensional virtual reality computer-based 3-D project. Dr MacDonald agreed that the idea sounded very plausible and was confident with encouragement.

Fundamental to my own project is Helen Macdonald's discovery in her book "H is for Hawk" (2014) that Hawks are unable to seemingly understand two-dimensional line drawings, and yet tie that together on a visual plane with JA Baker's book "The Peregrine" (1967). Apparently, Macdonald's book was indeed influenced by Baker's earlier book. Dr MacDonald had read that section of the book slightly differently to myself, since her interpretation was that even though this was a line drawing, it may not necessarily be a drawing of edges, in the kind of style that I have been rendering. However, what it did bring to Juliet's mind was an excellent reference to work by an illustrator and storyteller Ernest Seaton Thompson, around the mid 19th century, who although English-born, spent many years in the Canadian wilderness as a trapper. His experiences allowed him to produce many books of a genre of naturalist writing, but in the margin, on many pages, he provided some lovely, very straightforward and minimal, yet readily recognisable sketches (as mini sketches), almost similar to those on my storyboard. Juliet very kindly provided me later with URL links to some of his books, which are now in the public domain and not subject to U.S. copyright as he died in 1946.

A title of one of his books jumped out at me...  "The Book of Woodcraft and Indian Lore" published in 1912.  How could anyone not find this interesting?  On taking a look at this book, and many others, freely available through the internet archive, http://www.archive.org/ I could see immediately what Dr MacDonald was referring to.
Sometimes, he represented through line breaks, the lost&found line style and an also, outline, rather than the full 'edge' of objects and animals, to provide sufficient in order to recognise a representation. Ernest Seaton Thompson produced some beautiful drawings through a kind of lost and found line style, with many parts only skipped over as blank space, but nevertheless provided sufficient detail (albeit very sparsely) for a viewer to recognise what may be happening in a particular scene.

Having reviewed some of these beautiful drawings and sketches after our discussion, Juliet has perfectly identified an excellent source of material for me to consider and potentially draw inspiration from. Seaton Thompson was able to capture minimal detail exquisitely and I thoroughly enjoyed looking through his books.

I still have a lot of work to do based on Dr MacDonald's previous recommendations to look at "Essential Cognitive Psychology" by Alan J Parkin (2000). In particular the chapter regarding visual perception. The psychologist, Marr, provides some excellent historical reference which Parkin builds on.

Finally, I explained my need to create the body of my essay as soon as I possibly can, so that I have sufficient material the cat I can begin to hone and craft into a short and meaningful essay. Much of my blogging will allow me to use this as a reference, together with my metaphors and play of words, as a creative process. Part of the artistic production may be intangible, but the writing is part of my creative practice, and the drawing becomes a meditative contemplation of the practice.


"Alpine-ism is the art of climbing mountains by confronting the greatest dangers with the greatest prudence. Art is used here to mean the accomplishment of knowledge in action… There is an art to finding your way in the lower regions by the memory of what you have seen when you were higher up stop when you can no longer see, you can at least still know."

Posted by Graham Hadfield at 18:09