Reflections on a meeting with Dr Juliet MacDonald, Friday 10th of June 2017.

Juliet started the conversation by congratulating me on the regularity of my blog posts and explained that she had enjoyed reading them. She stated that I clearly write a lot which is a healthy activity.

I provided Juliet with an initial draft of a storyboard, which I been concentrating on for most of the last few days, to help to layout the essay and the contents. My intention was to bounce the ideas of the storyboard off Dr MacDonald to make sure that my proposal to use nonacademic phrases as headings for my research and the reflective essay is appropriate for submission. Rather than the traditional form of an introduction, methodology, literature review and so on, I have decided to use headings which are taken from both JA Bakers The Peregrine (1967), together with phrases often used in falconry and hawking. 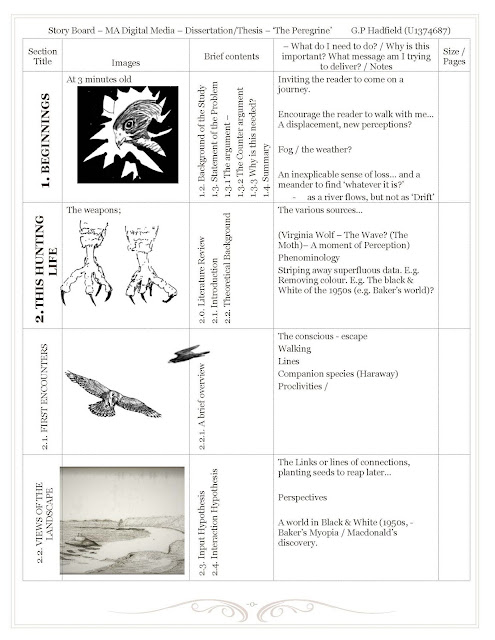 Headings for each of the chapters (slightly paraphrased) are therefore adapted, even though I am trying to follow the standard academic principles and thesis format. This creates a similar kind of structure, to become more "falcon-like". 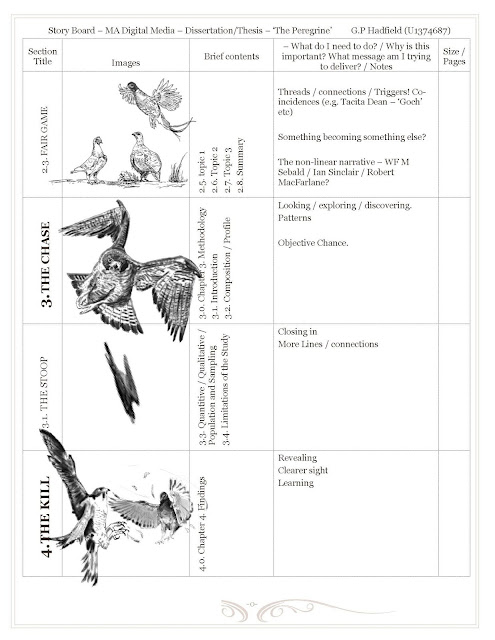 For example, Introduction is replaced with "Beginnings"; and Methodology is replaced with "The Chase" And Findings I have replaced with "The Kill" and so on for similar headings and phrases. Those are the thoughts that I have at the moment, and Juliet liked the fact that it gives the document structure. It was recommended that I may reflect a little more on continuing this predatory structure, and in thinking about what does that say about how I am figuring out knowledge and learning with the structure of research? It is a nice way of organising the project as a kind of pursuit, and when I am considering a broad Vista in front of me of potential research material (just as a Peregrine looks upon the landscape and sees various forms of prey). Thus, I am able to narrow down and dive into a chase, a kill, grab it and consume it, then look around for the next meal. (Sustenance in other words, including intellectual digestion).


Dr MacDonald suggested that what should also be part of my essay structure/and/or introduction is either in the chase or before the chase, an idea of where I am flying above the ground, and I can see a vast territory and landscape below me? And there is a sense of "oh my goodness there is so much choice!" about the reference and research subjects. I confirmed that "the view of the landscape" is within my opening chapters, so I'm glad that Juliet clearly understands my approach so quickly!

In essence what I am attempting to do, after reflecting on a recent film that I managed to find after Dr Bailey's recommendation to research the works of WG (Max) Sebald (1944 to 2001) a creative writer and professor of the University of East Anglia.

In many of Sebald's books, he invites the reader to take a walk with him, literally, as he narrates his books through the journey and process of a walk. In a way, this is similar to JA Baker. An invitation to come on a voyage, to encourage a view as unaccompanied guidance. Sebald often starts with a literarily magnetic device and method which some have referred to as "fog". He commences the journey (the walk) as though staring through a thick layer of mist or fog, unsure of where he is going or the destination. This unclear goal, perhaps too distant to understand immediately, requires a method of meandering. I'm conscious that this is a similar trait that I have myself, as I often meander through my own writing and reflections. However, the metaphor I'm using is important to remember as river meanders, it has a final destination that takes many twists and turns. This is very different from drift, which arguably does not have a predefined target per see. Furthermore, it is a line if it is to be stretched out straight. Juliet pointed out correctly that a river flows from a higher point down to a lower level, and has direction and purpose, and in reflection, I think about as the river reaches its destination it often gets wider and slows down, which is not dissimilar to my own research processes.

Playing with different metaphors is part of my project, and Juliet has recognised this from my previous blogs. Various forms become different metaphors, in similar ways to Tim Ingold's metaphors in his book "Lines: a Brief History" (2007). All of these metaphors are useful ways of thinking about things according to Dr MacDonald and encouraged me to continue to use them, not only to articulate but also to reflect with.

The metaphor of a Peregrine's flight and the chase, hunting in the kill also has the connection to Tim Ingold's ideas of the line.

Finding threads and triggers through my writing is an essential component of it, and Juliet recommended that I introduced the ideas of Tim Ingold and his lines early in the essay. Once this reference has been made, I can then go on to expand on the whole notion of threads and connections, the walk, the line of flight, the line of enquiry, the chase and the kill et cetera.

While my storyboard is a useful tool in providing some structure to the reflective essay, it is important for me to remain flexible and to cut and paste the various sections of the storyboard and feel free to move them around to get a succinct and legitimate flow of ideas. Ultimately, the final part of the essay, that is the sections of "sustenance and digestion" (and digestions is a particularly poignant method of thinking about self-reflection), that should help me to explain. Thus, articulate what all of this research and the journey that I have taken means to me, and that is me as an individual. The thing that really captures that is the picture at the back of Helen Macdonald's book "Falcon" (2006), which shows a photograph of me walking through an underpass in London some 12 years ago, a reflection if you like of my own life with its various changes. A very different life that I had, but with a hint of escape that is subconsciously being suggested through the graffiti and artwork of the stencilled hooded goshawk to the right of the picture, on the underpass wall. 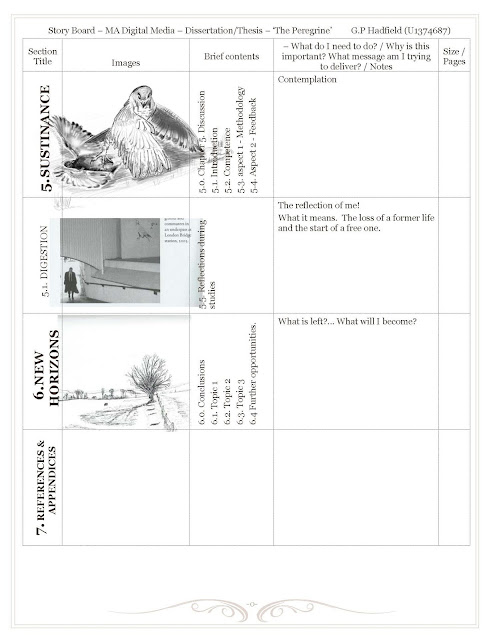 This photograph coincidently appears at the end of Macdonald's book, and it is my own intention to repeat its presentation and explanation at the end of my research essay. It provides a piece of magic, it could be a myth, and yet everything points to it being true. I, therefore, see it as clear opportunity to use the image in a very powerful way. Dr MacDonald agreed that this would be a good idea, as it also reflects my journey back to that point, and rediscovering that point through some weird intellectual journey.

Posted by Graham Hadfield at 14:33